Quick!  Close your eyes and picture a Jew.


For close to 100% of us, the mental image we have will be of a Jewish man.  This despite the dramatic historical advances Jewish women have made in Jewish education, community service and other roles outside the home in the past 100 years.

Back in the Old Country, when I had both discretionary income and wall space, I collected images of Jewish women doing Jewish things.  It was an interesting hobby.  I was able to afford to buy almost everything I saw, because the artwork was so rare.  At the height of my collection, I had maybe a dozen pieces.  They included women baking challah, an old woman with a heavily-lined face, deep in private prayer, women lighting Shabbat candles (the most iconic image of Jewish women) and an unusual painting of a woman, her young son and teenage daughter making havdalah.

I should have held on to more of them, because, if the current trend continues, it may become a crime to produce such works.

There is a trend, certainly in Israel, and possibly in other Jewish communities as well, to eradicate the presence of women, or images of women, from the public eye.

ITEM: Mea She'arim to ban women from certain Jerusalem streets during Sukkot
Out of a self-proclaimed desire to avoid mingling of the genders during public ceremonies related to Sukkot, the men of Mea She'arim have declared that certain streets in their neighborhood, most notably the main drag of Mea She'arim Street, will be off-limits to women. Though blatantly illegal, Shmuel Poppenheim, an unofficial spokesman for the community recently told the Jerusalem Post, "It's not an extreme measure, it's a moderate way of ensuring that the spiritual nature of the Simhat Bet Hashoeva is maintained. There is no need to make a big drama out of it."

ITEM: Last year, a mechitzah was constructed in a public street in Jerusalem to prevent men and women from walking near one another on public streets. 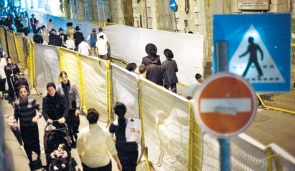 ITEM: The Jerusalem Light Rail produced print ads for certain neighborhoods that explicitly eliminated any images of women.
The Jerusalem Light Rail was trying to be sensitive to the values in certain neighborhoods which prohibit any images of women in ads and other printed materials, so they replaced the image of two women's faces in their safety ads with an image of two men's faces.

ITEM: A major Jewish book publisher had their graphic design team airbrush all the faces of women in their book catalog before it could be inserted in certain Jewish newspapers.

ITEM: Certain Jewish publications, as a matter of editorial policy, will not publish pictures of women, even to the point of digitally-editing news photos.

ITEM: I recently read an ad for a publication looking for a writer which explicitly said that a woman could write the article, but it had to be published in her husband's name.


ITEM: The issue of Israeli buses which require women to sit in the back of the bus rages on in the courts.

ITEM: Video and print images of Jews in Israel invariably include exclusively, or at least in the greatest preponderance, images of men - men at the Kotel, men building sukkot, men examining lulavim in the marketplace, men dancing in the streets, men lighting Chanukiot, male soliders, etc.

Of course I recognize that these things men do are captivating, iconic Jewish images.  And yes, I am aware that some women would rather not be pictured, out of a sense of maintaining their own privacy or for fear that men might have a sexually inappropriate reaction to their image.

However, what I see on a regular basis convinces me that this has all gone way beyond reasonable and proceeded deep into extremism.  I am a religious woman who dresses modestly and covers my hair AND it is my strong personal feeling that this trend of making Jewish women invisible has already reached a stage of pathological avoidance.


There is no way I will ever agree that this sort of behavior brings kedusha. One simply cannot attain holiness at the expense of kavod habriot (the requirement to treat all human beings with dignity).

Just this morning I was looking at the flags for simchat torah which were being sold in a regular toy store in downtown Rehovot. All of them had just little boys on them. I would have bought one for my granddaughter who was visiting me, but didn't because it made me feel bad.

Great post Rivka. Whilst we may not be seen, we are heard, by the thousands who read our blogs.

They [men] are so threatened by us they try to make us disappear altogether.

Before Moshiach, women will be superior to men.

Oh, come on. There is a portion of this population that pushes this agenda, just as it does with not working or serving in the IDF. They're all wrong, it doesn't rise to the level that you write about in you post though. Do you live in Mea sharim? If so, perhaps you should be looking for another neighborhood, if not, posting that its like this in all Israel makes others who are not here feel like this may be the truth - and its not.

Yonatan - If this trend was limited to a fringe group in Mea She'arim, I would not have written as I did. This increasingly pervasive trend is not limited to sikrikim. Sadly, the tendency to erase women from the public domain exists in many other Jewish communities, not just in Mea She'arim and not even just in Israel.

I gave 8 examples (and I could have given more), some of which are not even specific to Israel.

The vast majority of my blog posts are about how amazing life in Israel is. This trend of disappearing women from the public eye is troubling exactly because it compromises the holiness of Jewish life - both here and in chutz l'aretz.

I don't think of the chareidim the epitome of Judaism. They imitate other religions. Don't take them so seriously.

I think it's a 'natural' reaction to the provocative mass media and the weaker generation. "Better safe than sorry." So many homes are getting broken up because the men cannot control themselves. The internet just reinforces the ease we can get our fix for visual stimulation, and yes, many billboards and newspaper ads are simply not modest.

I don't think the point is to repress women, but more as a desperate measure to protect the men.

Do I agree and try to justify, no. But it just goes along with the trend of 'ultra-modest' Taliban cult.

Rivkah, this article needs to be written because it is really getting out of hand, even in Wilmington, NY recently there were sign's put up in Yiddish which stated"if a man is walking toward a woman on the side walk (she) is to step aside.Then there is Jewish women dressing like the Taliban in Jerusalem, Yes, men should be protected against the possibility of arousal. However, Men should be men too for their women. Women need them to be gentlemen, strong, brave with self control. Defending us and protecting us not demeaning and lessening our existence, acting weak and vulnerable to the very appearance of a woman. If their minds are on G-d, as they should be, then when they see other Frum women then they should look at them as a mother, sister, aunt ect... not as an object. So yes Rivkah do post about Meshugana every time you see it then many eventually the light will turn on and other wont follow crazy.

I think this is a great post. You clearly showed significant examples of the visual marginalization of women. Thank you for highlighting this issue!

I think it's important to note the hypocrisy of the idea of women being hidden to avoid distracting men. If we're going off of that justification, we are saying that women walking around outside can ONLY be related to in a sexual dimension, and therefore must be removed from view of the men. This removes the possibility of women being powerful subjects in the world. On the flip side, this also the possibility of men ever being sexual objects. Do not women gaze as well? Why are men's faces standard and not distracting? Why must they always be the ones doing and watching, while women are silent and obscured?

This is an issue of feminism in the Jewish world, but it also speaks to larger issues that are constantly being grappled with.